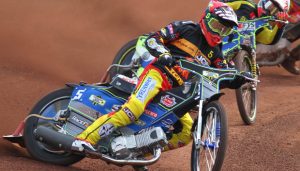 LEICESTER No.1 Nick Morris scored a paid maximum as the Lions were taken to a last-heat decider in a 48-41 win over Berwick.

Morris (14+1) combined with Ryan Douglas in the decider, with Douglas passing Nikolaj Busk Jakobsen off the last bend to mean the Bandits went home pointless.

Busk Jakobsen had earlier blown an engine when winning Heat 13, whilst reserve Leon Flint impressed again for the visitors with 11.

Leicester boss Stewart Dickson said: “It was harsh on Berwick to get nothing, because it takes two teams to have a good meeting.

“We aren’t firing on all cylinders, I know that, and I think everybody watching the meeting today would have known that.

“Berwick will certainly feel they deserved a point and they rode well enough to get it, whilst for us there were some encouraging signs and also one or two concerning ones too.”

Bandits manager Gary Flint said: “To say I am gutted is an understatement. We fully deserved something from this match. It was a proper team performance, and we were very, very unlucky.”