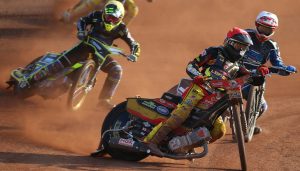 LEICESTER and Berwick fought out a 45-45 draw in the National Development League on Sunday.

Youngster Ben Trigger won his first race at this level in a 5-1 with Tom Spencer in Heat 14 to level the scores after the Bullets had opened an early six-point lead, and the final heat was shared with Dan Thompson (13) taking the win whilst Leon Flint (12) and Kyle Bickley got the better of Joe Thompson.

Lion Cubs boss Dave Howard said: “After being six down after two races, everybody really fought hard, and obviously with them having a top two of Bickley and Flint and a reserve who was really scoring, it made it difficult.

“But we fought away and Heat 14 was amazing to bring us level – I think was in tears myself with that one!

“Then Dan and Joe did a great job to get us in the position, and it was just one of those unfortunate things. It was a great meeting, and I was really pleased with the way we fought back a number of times from being behind, so we’ll take the point and move on.”

Berwick boss Gary Flint said: “We are pleased to take a draw and a valuable two points which puts us five points clear at the top, but disappointed as it could easily have been all three from a victory.”