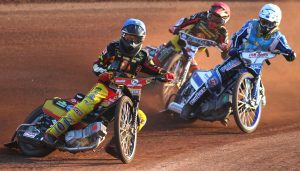 LEICESTER made it two NDL wins out of two as they overcame Armadale 50-40 at the Paul Chapman & Sons Arena.

Dan Thompson reeled off five straight wins for the Lion Cubs before conceding a 5-1 in Heat 15 as he ended on 16 points.

Nathan Greaves scored 13 for the Devils, who were hampered by a heavy crash for previously high-scoring reserve George Rothery in Heat 2.

Leicester boss Dave Howard said: “Overall it was a solid team performance again with Dan and Joe leading the way, and Tom (Spencer) once again was really solid, scoring in every race and getting a couple of wins.

“I think a large amount of Ben’s family were here and they were very vocal, and obviously everybody likes to see someone who’s so young coming in and really putting it in between riders in the first meeting, so it was a great performance from him in his first team meeting.”

Armadale co-promoter John Campbell said: “George Rothery’s unfortunate fall in Heat 2 undoubtedly changed the complexion of the match, a win for George there would have likely led to more points throughout the match.

“Nathan Greaves and Tom Woolley were excellent and showed great class in Heat 15 as they held off the Thompson twins.”