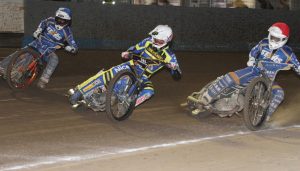 PLAY-OFF qualifiers Sheffield were held to a 45-45 draw at bottom club King’s Lynn on Thursday.

The Tigers were set to go six points up when Adam Ellis came to grief on the last lap of Heat 13, with a win for Lewis Kerr in the next race levelling the scores.

Josh Pickering (13) won Heat 15 for the visitors but Kerr (14+1) and guest Michael Palm Toft (10+1) relegated the previously unbeaten Jack Holder (12) to the back as the meeting ended with honours even.

Sheffield boss Simon Stead said: “It was a pretty good team performance, I could not ask for much more.

“We just needed a bit of luck on the day to see it out but we did not get it. It feels like a loss and probably feels like a win for King’s Lynn, but we will take it on the chin and move on.

“I felt like we had done enough during the meeting to win it and we would have seen it out but for a bit of misfortune in Heat 13.”

Kerr said: “It was a tough night, I was pretty busy but I have had a couple of good weeks and my confidence is high.

“It is a shame that the home meetings have ended now but we will look to take this into the away meetings we have left and hopefully pick up some points.”