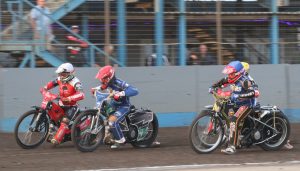 PETERBOROUGH marched on with a 46-44 victory in a last-heat decider at local rivals King’s Lynn.

The Panthers took control of the meeting with back-to-back 5-1s in Heats 11 and 12 to give them a six-point lead.

But home No.1 Richard Lawson kept his side in the meeting with a last-ditch pass on Bjarne Pedersen to win Heat 13, and then combined with Lewis Kerr for a 5-1 when he came into Heat 14 as a tactical substitute.

Lawson went into Heat 15 with a maximum 15 points to his name, but although team-mate Erik Riss (11+1) won the race, Lawson was relegated to the back by Chris Harris (12+1) and Michael Palm Toft (11+4) to leave the Panthers celebrating.

Peterborough boss Rob Lyon said: “What can I say about our team? They just keep grinding away, and we don’t panic, we know we’ve got quality in certain heats, and it paid off for us.

“Heat 15 was a toss-up really because Bjarne had started to go well after changing bike, but I just felt Bomber had a race in him and could spoil the party a bit.

“Tofty had been excellent all night, and it worked out well. We were out-trapped initially, but the boys pulled it out and it’s a great result for us.”

Stars manager Alex Brady said: “It was within touching distance for us, and it was a fantastic effort from the full one-to-seven which is truly the first time I’ve said that this season.

“I’m proud of the team but just gutted not to get over the line, and the general reaction from the fans even though we’ve lost has been quite good, which you don’t always expect.

“But it was a good speedway meeting with some good racing, and we’re just gutted to be on the wrong side at the end of it.”