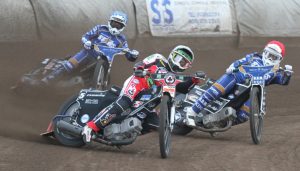 BELLE Vue raced back to the top of the Premiership table with an emphatic 51-38 away win at King’s Lynn.

The Aces reeled off three 5-1s in the first four races to take control of the meeting and inflict a third successive home defeat on the struggling Stars.

Aces boss Mark Lemon said: “It’s a great feeling, at this stage of the season, to still be unbeaten and to see the boys performing so strongly away from home.

“King’s Lynn were struggling a little bit. They’ve had quite a few changes recently and maybe not as much time as they’d like for their riders to gel.

“But our boys took no prisoners. We were strong from start to finish and everyone did their bit to make sure we took maximum points from the meeting.”

King’s Lynn manager Peter Schroeck said: “You can’t take away much at the minute but there were some glimpses, especially Heat 15.

“We had a good chat in the pits after Heat 9, there had been a lot of rushing around with us worried about the weather and the possibility of rain so there was not much time to have a proper chat.

“Once we got together we fired them up a little bit and suddenly we turned it around a bit. We are very disappointed but we have to pick ourselves up, that’s all we can do.”