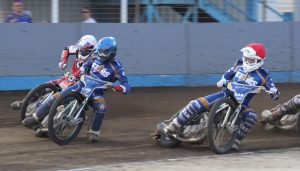 KING’S Lynn stunned leaders Belle Vue with a dramatic 46-44 victory to finally gain their first home win of the season.

The Aces led by six points with four races to go but the Stars pulled off a remarkable comeback in new boss Alex Brady’s first match in charge.

Richard Lawson (17+1) took a tactical substitute ride in Heat 12 and gained a 5-1 with Erik Riss, and skipper Lewis Kerr and Connor Mountain then did likewise in Heat 14 to put the hosts ahead.

Although Dan Bewley (14+2) won Heat 15 for the Aces, Lawson and Thomas Jorgensen shared the spoils to the delight of the home crowd – with the Aces knocked off the top of the table although they did gain an away point.

Brady said: “It could not have gone any better. First and foremost, it was a great night of speedway and the result was the cherry on top of the cake. I am over the moon and could not have asked for any more from the boys.

“They did everything I asked of them. These boys know how to ride a bike, all they needed was a bit of belief that they could do it here at King’s Lynn and they have proved they can. Hopefully it is onwards and upwards from here.

“But realistically, we cannot win every meeting. We always aim to take at least a point from all our matches, and we’ve only failed to do that once this season.

“This wasn’t the same King’s Lynn team that we encountered earlier this year. They have regrouped and made changes since then, and they were changes that have strengthened them.”