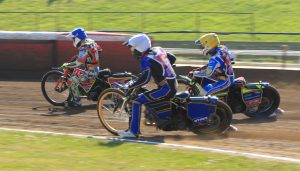 DAN Gilkes raced to his first-ever NDL maximum and in the process salvaged a 45-45 draw for Kent against Eastbourne.

Gilkes won the decisive Heat 15 for his fifth victory of the day, whilst visiting duo Jake Knight and Nathan Ablitt packed in for second and third ahead of Ryan Kinsley to ensure two league points.

The Royals dominated the race wins with 13 out of 15, and reserve Jake Mulford racked up 14 points from six rides. Ablitt (12) and Knight (10+2) led the way for a solid Seagulls side.

Kent boss John Sampford said: “The neutrals will say it’s a fair result, one or two riders had some early season teething troubles and the youngsters will need track time to come good.”

Eastbourne co-promoter Lee Kilby said: “It was a terrific result. Everybody contributed, which was the most pleasing thing.

“When you walk away with a draw and everyone has scored points, that is a complete team effort.”