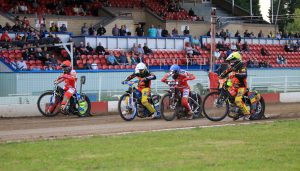 LEICESTER cranked up the pressure on their play-off rivals with a thumping 53-37 win at Kent.

The Lions were in dominant form at Central Park and are now strongly in contention with Redcar and Glasgow in the race for a top two Championship finish.

The visitors’ heat-leaders reeled off a string of race victories with Nick Morris (13+1), Ryan Douglas (12) and Hans Andersen (10+1) recording three wins apiece, whilst Scott Nicholls top-scored for the Kings with 11.

Leicester boss Stewart Dickson said: “I was hopeful of an away win tonight, but not by that margin, and it means we’re unbeaten in eight now in all competitions.

“We are coming into form at the right time, which is something I spoke about in July and August, and now it’s a case of keeping it going.

“It shows that if all seven score, we can go to most places and score at least 42, 43 which is so important when it comes down to two-legged ties in play-offs and Cup matches.

“I’m very pleased, to get the extra point is a real bonus for us, and I always felt we could have a say at the top.”