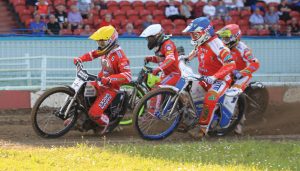 GLASGOW kept up their 100 per cent start to the Championship campaign with a 51-39 win at Kent.

The Tigers collected all four league points from their trip to Central Park despite trailing by four points on the night after Heat 7.

Both sides lost a reserve with Glasgow’s Jack Smith falling and being collected by Kent’s Dan Gilkes in Heat 2, with the pair suffering arm and foot injuries respectively.

Glasgow boss Cami Brown said: “Broc was the start of the night dropping just one point to an opponent, and Sam Jensen was absolutely brilliant as well – despite having to ride seven times.

Nicholls said: “It was always going to be a tough match as Glasgow are most people’s tip to win the title, and then we had to cope with R/R for Cameron (Heeps) and losing Dan to injury right at the start.

“So I thought we did really well to hang on in there as long as we did and indeed give the Tigers a fright by pulling away into a handy lead in the first part of the meeting.”