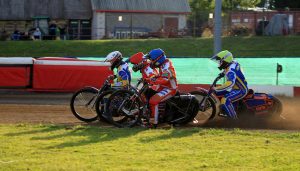 EASTBOURNE gave their Championship play-off hopes a big boost with a 47-43 win at Kent.

The Eagles came out on top in an intense battle at Central Park, clinching victory with a 5-1 from Tom Brennan and Drew Kemp in Heat 14.

Skipper Lewis Kerr won his first three rides and top-scored with 11+1 in a solid Eastbourne display, whilst Scott Nicholls (13+1) and Paul Starke (13) led the way for the Kings with Troy Batchelor picking up 7 on his debut.

Eagles boss Trevor Geer said: “What a great night. It doesn’t matter which club you are, away wins are few and far between, but tonight we pulled it off and it’s a fantastic feeling.

“I thought it might be tough meeting, especially after Kent had strengthened, but all the boys rode well tonight, from 1-7, and they all deserve credit for what they have achieved.”

Nicholls said: “Of course I’m bitterly disappointed that we lost but from an entertainment point of view, the paying public had some great racing to see.

“For Troy it was always going to be difficult as this was the first time he’d seen the track. His performance and Cameron’s (Heeps) determination to improve means we can take the positives out of this and go again at Birmingham tomorrow.”