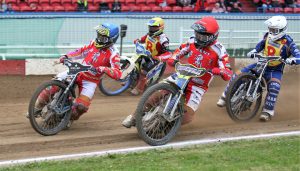 KENT kept up their late push for a Championship play-off place with a 50-40 win over Birmingham at Central Park.

Troy Batchelor and Scott Nicholls both scored 13+1 for the Kings and saw them through the closing stages with two late 5-1s which also prevented the Brummies from taking any points from the meeting.

Erik Riss scored 14 for the visitors and reserve Jack Thomas impressed on his old home track with 12, but they were unable to improve their own top-six hopes over the weekend.

Nicholls said: “Believe me, we’re pushing for the play-offs – it’s been a tough start, but the fans have been amazing and the play-offs are what we want.”

Thomas said: “It’s always good to go back to a former club and score some points. Kent is a cool little track and one I always enjoy riding.

“We have come up short but I can take plenty of positives from the meeting into the rest of the season now.”