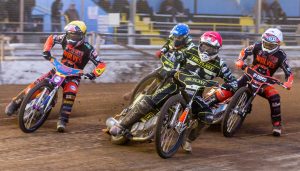 SAM Masters scored a paid maximum to lead Wolverhampton to four away points with a 49-41 victory at Ipswich.

Masters (14+1) and skipper Rory Schlein (10+1) combined for 5-1s in both Heats 13 and 15 to secure a tight encounter in Wolves’ favour and inflict a seventh successive defeat on the Witches.

Danny King (13) had given the home side the chance of a draw when he won Heat 14 as a tactical substitute, but with No.1 Jason Crump short of match fitness their disappointing run at Foxhall continued.

Schlein said: “It’s great to see some fight from the boys, we all dug deep and it was a good result for us.

“I was pleased with my own performance, but it was all about the team and we’re really pleased with the result.”

Ipswich boss Ritchie Hawkins said: “Jason struggled more than he thought he was going to with his fitness, but we had too many other riders not performing.

“We need to start getting more consistency individually and as a team. We can’t keep carrying two or three people having off-nights as it is different guys on different nights, the league is too strong and too solid to do that.”