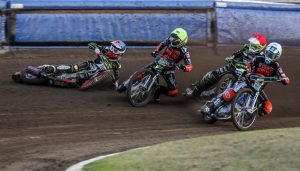 WOLVERHAMPTON moved seven points clear at the top of the Premiership with an emphatic 54-36 win at Ipswich.

It was a ninth straight victory for the dominant Monmore men, whose run began when they won at Foxhall back in late June.

Skipper Rory Schlein led the way with 11+1 whilst there was a best-ever top-flight display from Rising Star youngster Leon Flint, who scored 10. Danny King collected 14 from six rides for a Witches side who were well beaten.

Wolves manager Peter Adams said: “We’re trying very hard to finish top and this is a good result for us, obviously.

“We came here looking for the win and it went very well. We expected a very tough match here, but we made a good start and it went well from there.”

Ipswich boss Ritchie Hawkins said: “We were completely outraced by a far superior team, one that looks like potential champions against one that certainly does not.

“It was the same old story for us, not enough people going well on the same night and relying on half the team to win you a meeting. That does not work.

“I can understand why everyone is unhappy, we are all unhappy. I don’t think it is a lack of effort, you have got a team that is full of confidence against one that’s not.”