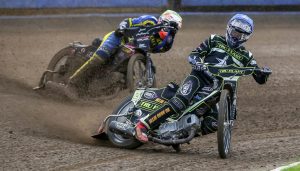 SHEFFIELD stuck a potentially decisive blow in the race for the play-offs with a crucial 49-41 win at direct rivals Ipswich.

The result moved the Tigers four points clear of the Witches in fourth place, and they still have four matches in hand.

Adam Ellis continued his fine form in Sheffield colours with 12+2 and Jack Holder recovered from a slow start to card 11+1 and was unbeaten in his last four outings. They combined for a last-heat 5-1 to secure all four league points, after Danny King had crashed out for Ipswich.

Paul Starke scored 11 for the Witches and King added 10, but a fourth home defeat of the season leaves them in a tough position.

Sheffield boss Simon Stead said: “The fans were amazing. There was rain in the air and yet they turned out in force, it gives us such a big lift when we see them.

“I’m delighted and I’m sure they are too. We rode well as a unit and it’s big result in our aim to make the play-offs.

“We have to beat Wolves at home on Thursday now, we cannot take anything for granted.”