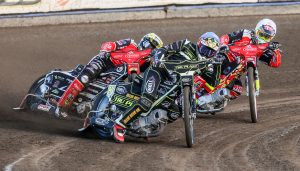 PETERBOROUGH charged into the Premiership’s top three with a 49-41 win at Ipswich on Thursday.

In-form Ulrich Ostergaard starred at reserve once again for the Panthers with 13+1, whilst Hans Andersen (11+2) and Scott Nicholls (10+2) hit double figures as the visitors controlled the meeting.

The Witches were well-served by new signing Craig Cook (14+1) and Danny King (13+1) but each time they reduced the deficit, the visitors hit back with a 5-1.

Panthers manager Rob Lyon said: “The all-round performance of the boys was the key and I’m delighted.

“The buzz around our team at the end was brilliant and I think we benefitted from our experience tonight. It’s a fantastic result.

“At the same time, I’m a realist and it’s still early days. A lot can happen in a short space of time, just look at Ipswich.”

Witches boss Ritchie Hawkins said: “It is hard to take defeat, we had plenty of race winners but there were too many last places. We weren’t getting heat advantages.

“Cookie was brilliant making his home debut and that is a positive. Danny was great, he had an engine failure which ruined one heat, but we looked like a six-man team versus seven.

“We are in a really low point, and it is a short season so we will need to turn it around quickly. I think that is possible once Crumpy (Jason Crump) is back and we have the base of a good team still.”