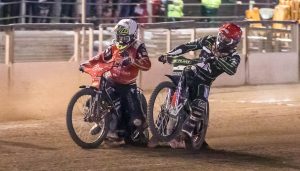 PETERBOROUGH won 53-37 at Ipswich on Thursday to cut the gap on Premiership leaders Wolverhampton to nine points – with three matches in hand.

The Panthers ensured a miserable end to the Witches’ troubled home campaign with their strength at reserve again evident as Hans Andersen racked up 15+2 against one of his former clubs.

Skipper Scott Nicholls added 10+2 for the title-chasing visitors, whilst Danny King was again outstanding for the hosts with 16+1.

Panthers boss Rob Lyon said: “We spoke on the track walk before the meeting and it was all about getting the four points on offer and that’s what we’ve done.

“We picked some good guests, Thomas Jorgensen was a little unlucky, Erik Riss did a great job and Leon Flint does what he does and rides his heart out.”

Ipswich manager Ritchie Hawkins said: “It was another disappointing night where we did not perform and relied on two or three riders, and that is never going to win you any meetings.

“On paper we are not a terrible team and not as bad as our results suggest. On paper we look like we could be a good side, but confidence is that low and it is just dropping and dropping. Roll on the winter where we can rebuild.”