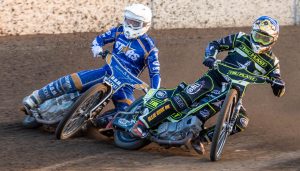 KING’S Lynn stunned local rivals Ipswich with a sensational comeback to win 46-44 at Foxhall on Thursday.

The Stars trailed by six points with two races to go but finished the meeting with two successive 5-1s from ex-Witches rider Richard Lawson on his debut, and skipper Lewis Kerr.

Lawson piled up 15 points and Kerr added 11+3, with reserve Anders Rowe starring for the home side again with 13+1.

The Stars lost Thomas Jorgensen who was badly winded in a Heat 12 crash, whilst Cameron Heeps came to grief during Heat 15.

Stars boss Peter Schroeck said: “It’s unbelievable. We came here with a fresh mind, we’ve made a change in the team, and it worked for us. We had a really good evening in the pits, and we all worked together.

“The tactical substitute fell in our hand in Heat 14 with the dynamic duo in Richard and Lewi, I decided to have a go at it, and it paid off. We had the best gates, so it wasn’t wasted, and then when the going gets hot you’ve got to keep it going!

“I’m just so pleased for the fans and for King’s Lynn Speedway. We had a lot of stick over the last couple of weeks, but I think we can be very proud tonight.”

Ipswich manager Ritchie Hawkins said: “It’s a really disappointing result. Well done to King’s Lynn, I though they rode really well on the night and I have no complaints about them taking victory.

“We weren’t good enough and we are massively disappointed to lose, and it rounds off a really tough week.

“To end up with three riders laid up in hospital in the space of four days is really tough for the team to take. We are short on bodies now going forward and we are going to need to look at our options and rebuild.”