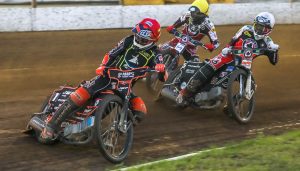 CRAIG Cook scored a 15-point maximum against his former club as Ipswich completed a positive week with a 48-42 win over Belle Vue.

The Witches followed up their victory at King’s Lynn by defeating the second-placed Aces for only their second success at Foxhall this season, giving their play-off hopes a boost in the process.

Two 5-1s in Heats 12 and 13 took the hosts eight points clear but the visitors forced a nervous finale by hitting back with their own 5-1 in Heat 14, before Cook secured the Witches’ win in the decider.

Second place for Brady Kurtz (13) in Heat 15 ensured the Aces would take a league point from the meeting, despite Charles Wright crashing out in his first ride.

Ipswich manager Ritchie Hawkins said: “Cookie is really enjoying his time with us, and he certainly got something working tonight.

“I’m really pleased for him and how he has conducted himself and fitted into the club from the word go. He has become an integral part of the team very quickly.

“We needed those two wins this week. We still have a big task ahead of ourselves to push for the play-offs, but we are still in the picture at least.”

Belle Vue boss Mark Lemon said: “It was always going to be a challenge when you’re faced with Craig Cook in vintage form, but the boys were very impressive and really dug deep to claw back the point.

“It was a major blow for us losing Charles Wright so early on in the meeting, and to his credit he was prepared to race on, but it was quite apparent that would have been unwise.”