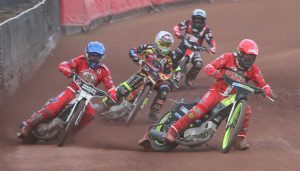 GLASGOW made it five wins out of five by defeating Redcar 52-38 at Ashfield on Friday.

The Tigers are seven points clear at the top of the Championship after another strong team effort in which all of their riders were paid for at least one win.

Glasgow boss Cami Brown said: “We’ve had some really good results so far but tonight it’s been an absolutely amazing performance with some fantastic racing against an extremely good team.

“Redcar will beat most teams in our league and I’m chuffed to bits that the boys have done so well tonight.

“Everybody has contributed again and it’s the formula we have for the team, where if one or two riders don’t fire at maximum power, the other ones can back them up – and so far, so good.

“But it’s only the start of the season and there’s a long, long way to go.”