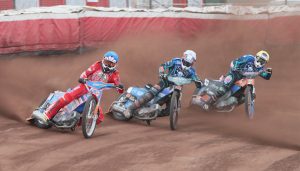 POOLE No.1 Rory Schlein crashed out of Friday’s 52-38 defeat at Glasgow – a result which takes the Tigers top of the early Championship table.

Schlein was taken to hospital with a leg injury after a first turn collision in Heat 1 with opposite number Craig Cook, who went on to record a 15-point maximum.

Cook was backed up by reserve Sam Jensen with 12, including four wins, whilst Danny King (13+1) and Steve Worrall (10) hit double figures for the Pirates and newcomer Ben Cook impressed with 8+3.

Glasgow’s Cook said: “It’s been weird being off for so long, and the start of the season has been very tough with a few wet matches and getting dropped by my Premiership side King’s Lynn.

“It wasn’t ideal, but we did some testing during the week and figured a few things out. We had a few teething issues, but I found the problem with one of the engines, which we fixed.

“A couple of years ago this would have got to me, and I’d have been down in the dumps. But I work hard and it’s not the end – I can fix things like I showed tonight – and it’s just taken one practice to get back to normal.

Worrall said: “Ben rode superb tonight. This was his first visit here and it seemed to really suit him.

“I didn’t really see how he was able to support me on that 5-1. I managed to get by Ulrich (Ostergaard) and by all accounts so did Ben, it was a good performance from him.

“We obviously missed Rory and our thoughts are with him and hope that his injury won’t be too serious.”