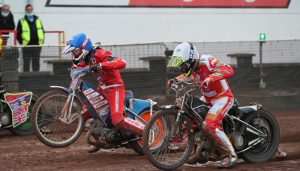 GLASGOW opened the new Championship campaign with an emphatic victory over Kent in a meeting curtailed by the weather.

The Tigers were 43-23 up when a halt was called after Heat 11, with reserve Sam Jensen top-scoring with an impressive 10 points, and all seven of their riders recorded at least one win or paid win.

Scott Nicholls collected eight points for the Kings and also broke the Ashfield track record – but the visitors were hampered by the withdrawal of Tom Bacon after a fall in Heat 1, added to the absences of regulars Paul Hurry and Daniel Gilkes.

Jensen said: “It was great to be back. We haven’t raced here since October 2019 so it’s been a long time.

“We’re very happy to get the win. It’s a shame the rain came but we managed to score some good points and it’s a strong start to our season.”