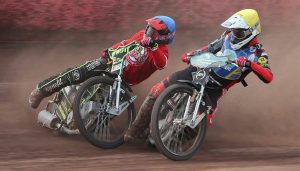 EDINBURGH turned the tables on local rivals Glasgow with a 46-44 win at Ashfield to inflict the Tigers’ first home defeat of the season.

The Monarchs had lost by two points in Friday’s curtailed Armadale clash but produced ten race wins on the track of their near neighbours with Sam Masters leading from the front with 14 points.

A tense encounter saw Edinburgh level the scores in Heat 7 before a run of seven successive shared races set up a last-heat decider, in which Masters defeated opposite number Craig Cook (12+1) with Josh Pickering (11+1) supplying the vital third place.

Edinburgh boss Alex Harkess said: “In theory we’ve probably been better away from home, I can’t give you an answer to why.

“I felt coming though, we might win. I felt if our heat leaders did what they can do they’d win enough races, and we’d just need the rest to pick up the odd points and today we had Kye (Thomson) scoring points and that was the big difference.”

Glasgow skipper Craig Cook said: “On a normal night with Ulrich (Ostergaard) I think the result would have been different.

“Obviously we wanted to win the three points, but we’re still at the top of the table. It’s swings and roundabouts and we’ve got to take it on the chin.

“The crowd have seen some great racing today, the best racing all season, so thanks to all the track guys and everyone who’s put the time in to do the track today.”