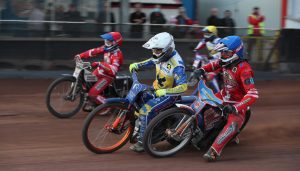 GLASGOW moved eight points clear at the top of the Championship with a hard-fought 50-40 win over Eastbourne at Ashfield.

The visitors were two points ahead at the halfway stage but the Tigers rallied to collect their sixth victory out of eight this season.

Craig Cook scored 13+1 for the home side and his Heat 15 win prevented the Eagles from taking a league point, whilst reserve Sam Jensen notched 12. Richard Lawson piled up 15 for Eastbourne with Lewis Kerr adding 10+1.

Glasgow boss Cami Brown said: “We’ve got a great bunch of lads and we dug in. We had a little chat after Heat 10 and we came back strongly in the second half of the meeting.

“Again we’ve not had everybody firing at once but it shows you the power we do have.

“I’m ecstatic, it’s a really hard win against a very good Eastbourne team. They’ve got a team full of stars – like we have – and they were always going to give us a challenge.”

Eastbourne manager Trevor Geer said: “After the interval we slipped away but up until then we were doing well. It was nip and tuck all the way. We thought we could pull this off.

“I think after the interval the track changed a little bit and Craig Cook showed his class. The meeting was a lot better than the score suggests.”