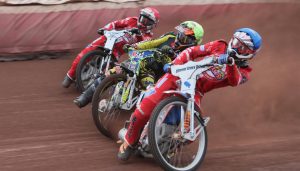 BERWICK will look to overturn a 12-point deficit when they host Glasgow in the second leg of their KO Cup tie tonight (Saturday).

The Tigers won 51-39 at Ashfield on Friday with Craig Cook leading the scoring on 12+2, whilst Aaron Summers collected 11 including three race wins for the Bandits.

Berwick bring in Danyon Hume to guest at reserve as Leon Flint is on European Under-23 Team duty in Germany with Great Britain.

Bandits boss Gary Flint said: “Twelve points was not in the script, but that Heat 14 5-1 certainly helped our situation thanks to Aaron and Kyle (Bickley).

“It’s a big task ahead as Glasgow are a great side, but the Bandits will be giving their all to make sure it’s us who progress to the next round.”