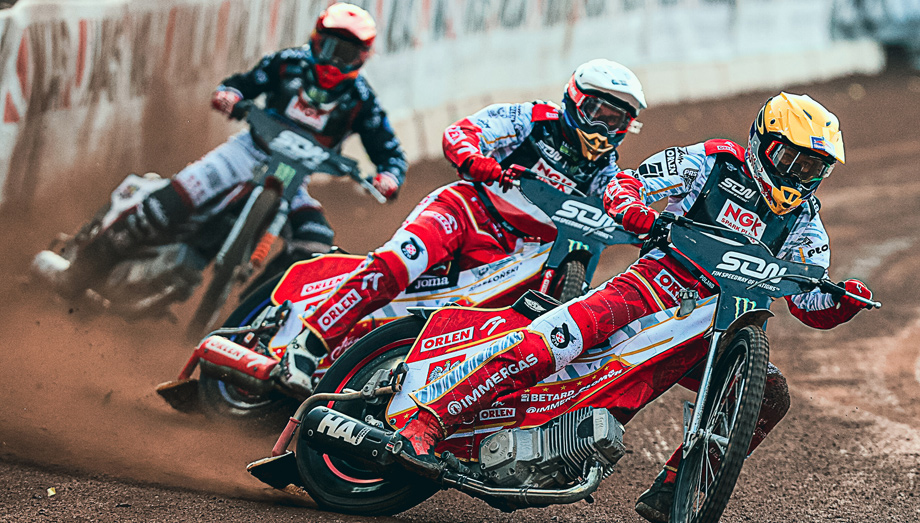 Polish skipper Bartosz Zmarzlik insists his team only has its sights set on Sunday after they claimed a comfortable overnight lead in the Monster Energy FIM Speedway of Nations Final in Manchester.

The Poles topped Saturday’s Final 1 score chart on 40 points, with Zmarzlik leading the way on 19, while Maciej Janowski scored 18 and under-21 rider Jakub Miskowiak added three.

Great Britain are 10 points behind in second place on 30 after a night which saw their triple world champion Tai Woffinden walk away from an horrific crash in race 18.

The Scunthorpe-born star caught Aussie rider Jason Doyle’s right leg as he tried to roar around him going into turn three at high speed.

Woffy fell heavily, bursting a large section of the air fence, but he eventually walked away from the incident. The former Wolverhampton rider is set to undergo hospital checks to assess his condition ahead of Final 2.

The Danes are third on 29, with France, Australia and Latvia all tied on 24 and Sweden placed seventh on 16 points after losing both of their senior riders Pontus Aspgren and Jacob Thorssell to a frightening fall in race six.

While the Poles came out on top at the National Speedway Stadium on Saturday, the seven nations meet over another 21 heats from 4pm UK time (17:00 CET) on Sunday, with the top-scoring team advancing to the Grand Final and the second and third-placed countries meeting in the Grand Final Qualifier for the right to join them.

With so much at stake tomorrow, Zmarzlik is very much focused on Final 2 and won’t savour Saturday’s success for long.

He said: “I think the whole of Team Poland felt good on the track today. But tomorrow is a more important day than today. I am really happy because everything worked on the first day – now I am waiting for tomorrow.”

Even if Poland tops the score chart, Zmarzlik knows the Monster Energy SON title race all comes down to four laps of speedway in the Grand Final.

He admitted: “This is a little bit hard for the whole team – it decides which medal you win – whether it’s silver or gold. Speedway can be hard sometimes.”

The Poles go into Final 2 seeking their first-ever Monster Energy SON world title after two straight silver medals in 2019 and 2020. Asked if he believes this is Poland’s year, he simply said: “We will see what happens tomorrow.”

Joint Great Britain team manager Oliver Allen was delighted with his side as Woffinden raced to 14 points, while his partner Robert Lambert tallied 12 and under-21 ace Tom Brennan chipped in with a heat win to score four.

But a positive performance was marred by Woffinden’s crash. Allen revealed: “He is in pain all over his body. I don’t think there is one area that stands out more than the others. He has a rib injury and he is going to see a specialist tonight.”

Cumbrian star Dan Bewley is available to deputise for Woffinden and knows the National Speedway Stadium track very well as he races for Manchester club Belle Vue in the SGB Premiership.

Asked how he rated Woffinden’s chances of racing, Allen said: “It’s 50/50. It was an awful crash. I actually think he should be grateful that he is walking around and he is relatively in one piece. I think he came away relatively unscathed all things considered.

“We will make a decision in the morning. Dan Bewley is here on standby – he has been here since Friday. We will see what happens. We wanted Dan to be part of the team and give us as much of his Belle Vue track knowledge as he could, which he did tonight.

“He has been a big help and tomorrow he might get the chance to help on the track. We don’t know yet. Tai is impossible to replace, but there aren’t many people who are better around Belle Vue than Dan.”

Swedish team manager Morgan Andersson says he could be without both Aspgren and Thorssell after the team mates tangled in a battle with Doyle going into bend three in race six.

He admitted: “Both of them are pretty second hand. Jacob is definitely out for the weekend and probably Pontus as well. Jacob has a concussion and smashed his helmet pretty badly and Pontus has a problem with his shoulder.

“It’s such a shame. We have put so much effort into this and we have 13 people here. We had all worked hard. This kind of thing can happen to any team, but I feel pretty empty now.”