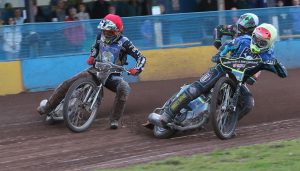 POOLE moved three points clear at the top of the Championship with a maximum haul from an impressive 50-40 win at Edinburgh.

Steve Worrall kept up his fine form for the Pirates with 11+1 from five rides whilst reserve Danyon Hume played a key role with 11 points including three race wins as all of the Pirates picked up at least one paid victory.

Home No.1 Sam Masters piled up 19 points from seven rides, taking extra outings as a tactical substitute and rider replacement, but the Monarchs’ tail was too long as they dropped more points at Armadale.

Pirates boss Gary Havelock said: “I am delighted with that result; it is a huge four points we have lifted tonight.

“It was a phenomenal effort by the lads especially when you consider that the two Bens (Cook and Basso) and Danyon haven’t ridden the place before. They all adjusted well and Danyon, in particular, was simply superb.

“I can say without any doubt that tonight was the best night I have had managing Poole Pirates. I have been absolutely loving the job standing in on the northern circuits for Middlo (Neil Middleditch).”

Masters said: “They’re not only the form team in the league but they are really good here at Armadale. Also, we didn’t have Richie (Worrall) who is one of the best riders on this track.

“If we’re using rider replacement and some riders aren’t on, it’s tough man! We all tried hard, but it wasn’t enough.”