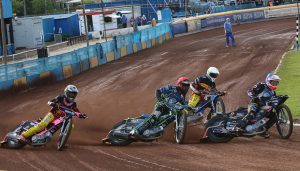 EDINBURGH defeated Leicester 49-40 in a thrilling contest at Aramdale which was far closer than the scoreline suggests.

The Monarchs came up with a grandstand finale, collecting 5-1s in the last two races to pull clear after holding a narrow one-point advantage for much of the meeting.

Josh Pickering (13) and Sam Masters (12+1) combined for the Heat 15 maximum which left the Lions point-less on the night, whilst reserve William Lawson impressed with 10+1.

Nick Morris scored 12 for the visitors whilst teenagers Dan and Joe Thompson combined for their first 5-1 at this level in Heat 2.

Edinburgh boss Alex Harkess said: “What pleased me most was their determination. They fought for everything. Josh Pickering and Sam Masters were top scorers but the man who changed the match was William Lawson.

“And that was after a last place in Heat 2! He made changes to his bike after that, rode a brilliant Heat 4 to win, then started changing everything again!

“To beat Leicester by nine on a night when Richie Worrall only scored five was very impressive, and I was happy with the whole team. Kye Thomson did well again with four third places, all important ones.”

Lions manager Stewart Dickson said: “I’m naturally disappointed to come away with nothing. We should have done better than that.

“I look down the scorechart and I know we’re a better team than that. It’s frustrating for us all, but we need to work hard to put it right.

“There’s no doubt Glasgow are the form team in the Championship, but we need to do something to make sure we can keep up with then, we need to improve.”