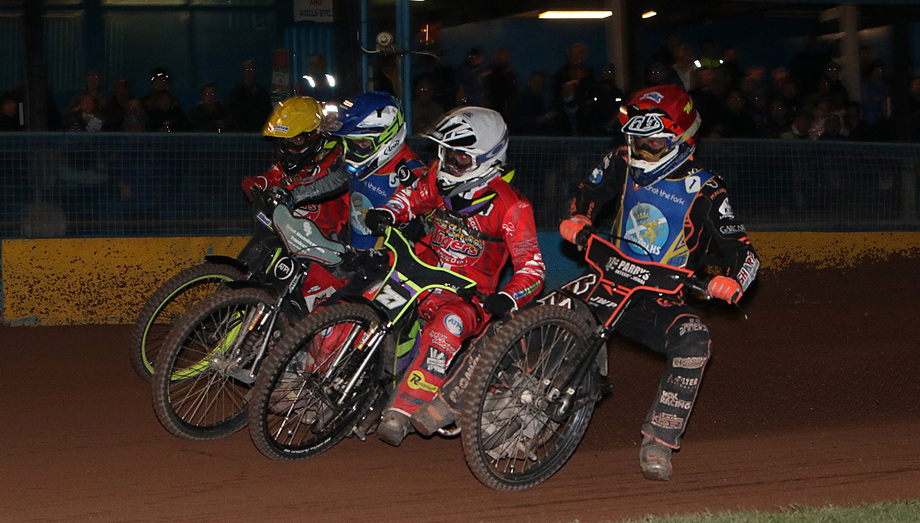 EDINBURGH clinched a place in the Championship KO Cup Final with a dramatic 55-35 win over Glasgow to overturn a 16-point first leg deficit.

The sides meet once again at Armadale tonight (Saturday, 7pm) in the first leg of their play-off semi-final.
Friday’s encounter went right down the wire with the aggregate scores level after the Tigers took a 4-2 in Heat 14.

The decider had to be re-run after Tom Brennan crashed out for Glasgow, but Sam Masters and Richie Worrall raced to a 5-1 for the hosts over Craig Cook to take them through.

Edinburgh boss Alex Harkess said: “I’m very satisfied, we achieved what we set out to do, there was a great deal of determination in that performance, and we rode very well.

“Everyone chipped in with wins and paid wins and they just would not be denied. Our youngsters missed a chance in Heat 2 when Jason Edwards fell, but he got a crucial win in Heat 12 and there were wins for Drew Kemp and Anders Rowe as well.

“Sam Masters and Richie Worrall proved in that last heat that they are great in these high-pressure situations.

“I’m not getting carried away about tomorrow (Saturday), things are never as simple as you think they might be.”

“I did say to people straight after the first leg that the tie wasn’t over. Why do you think Poole didn’t want to face the winner of Edinburgh v Redcar in the play-offs? They know they’re probably better on paper, but you can get badly beaten at Edinburgh.

“Armadale is a very technical track and unless you really know what you’re doing it’s difficult, especially if the home guys get their tails up.

“We go there tomorrow (Saturday) and give it 100%. It will be tough, if not tougher, as Tom Brennan won’t be there (FIM Speedway of Nations) – though we have a good guest in Leon Flint. We’ll get hammered if we don’t do a lot better.”