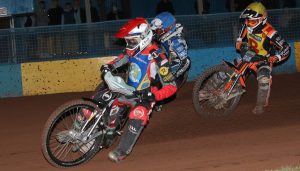 EDINBURGH took charge of their KO Cup quarter-final with Birmingham thanks to a 54-36 first leg win at Armadale.

Richie Worrall made a successful return from injury for the Monarchs with 14 points, with Sam Masters adding 12+2 and Josh Pickering 11 as the Brummies were limited to just two race wins.

Both of those came from skipper Chris Harris (11), whose victory in Heat 15 prevented Worrall and Masters from scoring five-ride maximums.

Edinburgh boss Alex Harkess said: “I felt we could have done better, we made some mistakes and let a few points go.

“I was pleased for Richie on his return though, I know he was a bit nervous but it felt so good to have him back.”