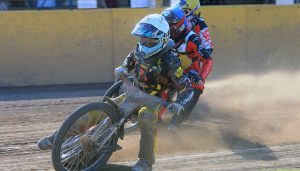 LEICESTER recorded their biggest-ever win at NDL level with a 54-32 victory at Eastbourne to go level on points with leaders Berwick.

Joe Thompson racked up 17 points from six rides for the Lion Cubs whilst brother Dan added 12+2 from five and Tom Spencer 13+1 as they overcame the absence through injury of skipper Joe Lawlor.

The Seagulls were without captain Richard Andrews and key reserve Nathan Ablitt, with No.1 Jake Knight winning his first three rides and top-scoring with nine.

Leicester boss Dave Howard said: “It’s very pleasing to get the win and pick up the four points, which makes up for the four we’ve dropped at home with the two draws.

“It was a tricky track with there being so many races on the day, with it being dry, then wet, then dry again, but our guys handled it a lot better than the home team, and they got their rewards.

“It puts us in a good position, it puts us back in the hunt in the league and we can look forward to going to Belle Vue a week on Thursday (July 29).”