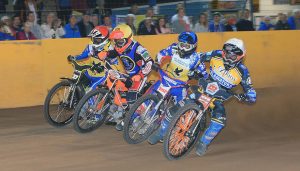 EASTBOURNE produced a powerful second-half performance to defeat Plymouth 54-36 at Arlington on Saturday.

Eagles captain Lewis Kerr collected a vital win over Gladiators duo Bjarne Pedersen and guest Michael Palm Toft in Heat 11 when the visitors paired their top two as they looked to cut an eight-point deficit.

Then Edward Kennett teamed up with youngster Nathan Ablitt for a 5-1 in Heat 12 as the hosts pulled clear.

British Under-21 Champion Tom Brennan top-scored with 13 points whilst Richard Lawson added 12+2, whilst Pedersen collected 10 for the visitors.

Eagles boss Trevor Geer said: “All the boys rode brilliantly tonight, especially Nathan who got stuck in and showed us what he can do.

“You could see his confidence grow as the meeting went on. It was brilliant to watch.

“Tom surprised me. He looked as if he had gone up to another level tonight. He was sitting on the back of the bike and fighting it like you see on the TV with Bartosz Zmarzlik in Grand Prix racing.”