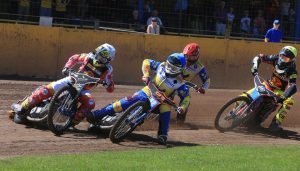 LEICESTER gave their Championship play-off hopes a massive boost with a 48-41 win at Eastbourne on Sunday.

The Lions raced into an early nine-point lead before the Eagles fought back and led by a point with five heats to go – before the visitors finished strongly to collect all four league points.

Nick Morris won four of his five rides to finish on 13, with reserve Dan Thompson contributing a vital 11, and guest Scott Nicholls scored 10+1. Richard Lawson led the Eagles with 12+2.

Leicester boss Stewart Dickson said: “Going into the last race we knew we had three points in the bag, but it was pleasing to get the extra point, and a special thanks to Scott for standing in.

“I know people were wondering if he’d be there after last night’s Grand Prix was abandoned, but he was true to his word and his team-riding with Dan in Heat 11 was fantastic.

“I think that was one of the turning points because it looked at that stage that it was turning away from us a bit.”

Eagles manager Trevor Geer said: “I knew it was going to be a tough meeting against Leicester, especially with Scott Nicholls guesting for them at No 1. He’s the best in the league around Eastbourne.

“We seemed to have the gremlins today. There were some bike failures when we were in for points.

“It was all little things but the match went down to the wire. We do this week after week but this time it was one step too far.”