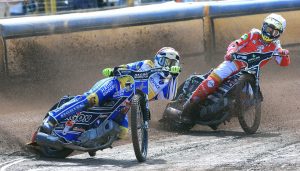 EASTBOURNE have one foot firmly in the next round of the KO Cup after an emphatic 58-32 first leg win over Kent.

But the Eagles have an injury concern over captain Lewis Kerr who was diagnosed with a suspected broken collarbone after a crash in Heat 9.

Tom Brennan led the way for the home side with 13 points and Richard Lawson added 11. Scott Nicholls (12) and Paul Starke (10) dominated the scoring for the Kings.

Eastbourne boss Trevor Geer said: “I thought it would be a real tight meeting but to take 26-point lead to Kent for the second leg is fantastic.

“The KO Cup a competition we always like to do well in. Eastbourne have always thrived on it, and it was good all-round team effort. The injury to Lewi, however, rather marred it for us.”