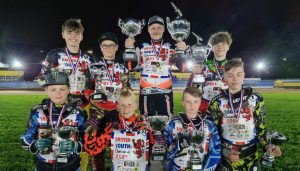 With Trigger and Harrison having already claimed their titles at the previous round at Leicester last month, all eyes were on the remaining rostrum places for the 250cc class, along with the 125cc Championship, which was still wide open between series leader Stene Pijper and Rushen.

Rushen knew only a win on the night would be enough to force a run-off with Pijper to decide the Championship, and coming off the inside gate in the Final he made no mistake, although Jamie Etherington kept him honest for the whole race.

Although Pijper had the favourable inside gate in the run-off, there was no denying Rushen’s determination and a brave first corner shot him to the front and Pijper for all his effort had no answer with Rushen crossing the fishing line to claim his first British title and Pijper having to settle for the silver medal.

The bronze medal went to Etherington as an impressive 11 points in the qualifiers and the all-important second place in the final ahead of his nearest rival Oliver Bovingdon, which was enough to claim the podium finish.

The race for the podium in the 250cc class also went down the very last heat, with Max James claiming the silver medal with and impressive full house in the qualifying heats, and for the bronze it was between Ace Pijper and Jody Scott who both qualified for the Final.

In the re-run after James had been disqualified after clashing with Pijper, Pijper bravely got out from underneath the air fence to just do enough to finish ahead of Scott to claim the bronze medal.