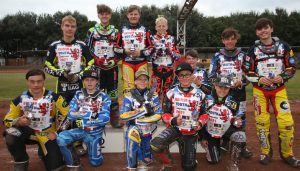 BEN Trigger and Luke Harrison clinched their respective British Youth titles with their fifth wins of this year’s series at Leicester on Monday.

Trigger won the 500cc section and Harrison the 250cc, and both will now look to complete a clean sweep in the finale at Plymouth on September 18.

Although the Championship for those classes has been decided with a round to go, there are still multiple outcomes to be decided at the Coliseum.

That series is to be decided with just two points separating Stene Pijper and Rushen, and in the same group just one point separates Jamie Etherington and Oliver Bovingdon in the race for the bronze medal.

With Harrison being crowned the British 250cc Champion for the second consecutive year, the race for the rostrum places in this class is still wide open with four riders still competing for the silver and bronze medals.

Max James looks likely to claim silver, but still has some work to be done, and just behind him there are only three points splitting Sonny Springer, Ace Pijper and Jody Scott in the race for a either a silver or bronze medal.