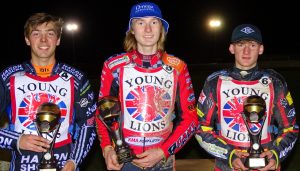 DREW Kemp made history by becoming the first rider to complete a hat-trick of British Under-19 titles with victory at Scunthorpe on Friday.

Kemp scored a 15-point maximum to follow up his victories at Redcar in 2019 and at the Eddie Wright Raceway last year.

Dan Thompson was second on 14 points, going unbeaten after losing out to Kemp in Heat 2, whilst Jason Edwards defeated Leon Flint in a run-off for third place after both riders finished on 12.

Kemp said: “It was pretty stressful at times and obviously it would be nice to win every race from the start, but that wasn’t the case tonight!

“It definitely feels great to win it, and to win it three times in a row which has never been done before, that does feel great.”