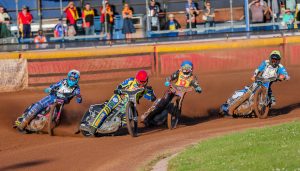 SCUNTHORPE have taken over at the top of the Championship after an impressive 51-39 win at Birmingham.

The Scorpions collected all four points from their trip to Perry Barr to overhaul Glasgow at the summit, with former Brummies Adam Ellis and Tero Aarnio both scoring heavily.

Ellis (13+1) dropped his only point to Chris Harris in Heat 1 whilst Aarnio contributed 12+1 and Thomas Jorgensen (9) won his first three rides.

Scorpions boss Dave Peet said: “I said a few weeks ago that it was only a matter of time before we started getting points on the road. I felt tonight was a must-win and all the lads chipped in and we did it – it was superb.

“Adam is a class act; it’s as simple as that. He’d didn’t put a wheel wrong tonight and won the big races for us. Once he sorts out our track – and he will – he’s going to be almost unstoppable.

“But the whole team were terrific tonight – every single last one of them. They all contributed to this victory.”

Harris said: “It’s not ideal because you’ve got to win your home matches especially if you want to make the play-offs.

“But Scunthorpe have got a good side, solid pretty much all the way through, and some of the boys struggled having not being on the bike.

“I’m sure that given time they’ll get back to their best, but the thing is we haven’t got time – so hopefully next week we can regroup and go again.”