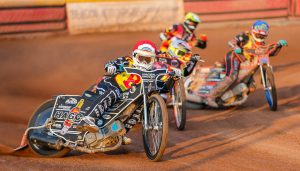 BIRMINGHAM put holders Redcar out of the Championship KO Cup with a 55-35 win at Perry Barr in Wednesday’s second leg.

It was the Brummies’ first home victory of the season as they overturned a two-point deficit, pulling clear in what had been a tense encounter as they finished the meeting with three successive 5-1s.

Erik Riss returned from injury with 13+1 whilst skipper Chris Harris added 10+3 for the hosts, whilst Jake Allen won his first four rides and scored 13 for the Bears – who were without four of their regulars due to injuries and Covid.

“The team worked as a team, the atmosphere in the pits was brilliant and it proved on the track as well.

“The guys were making superb gates tonight in the main – and even when they weren’t they were passing their guys, and there was some really, really good racing it has to be said.

“Everyone did their job, it was the definition of a full team performance and this is a real platform to build on and at just the right time too because from next week it’s non-stop for us.”

The Burmmies’ victory sets up a quarter-final tie with Edinburgh.