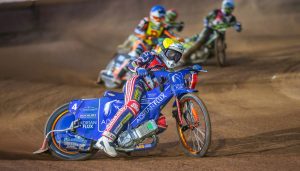 REDCAR secured their place in the Championship play-offs with a 48-42 win at Birmingham as the two clubs clashed over track conditions.

The Brummies led 16-8 after four races but the Bears took control following an extensive break and turned the meeting around to record their fourth away victory of the season.

Lewis Kerr was in outstanding form for the visitors with 15+1, suffering his only defeat to home skipper Chris Harris in Heat 15. Charles Wright added 13 whilst Paco Castagna (11+1) and Harris (10+2) top-scored for the Brummies, whose play-off hopes took a dent.

Redcar co-promoter Jamie Swales said: “The instruction from the management this evening was to leave with seven riders and for the lads not to take any risks and potentially suffer any injuries, but the boys were outstanding.

“Lewis has been a great signing so far and (guest) Jason Edwards got some really important points for us. For once, we got out of the gate as a team and we were brilliant, we fully deserved to take the win.”

Birmingham boss Laurence Rogers said: “I wonder whether if Redcar had been winning, they would still have complained.

“To be honest, there was very little wrong with the track. We know there’s a few bumps and bits, but the riders are experienced enough to ride those – but they (Redcar) wanted the track as they wanted it, and amazingly by the end they enjoyed it by the look of it.”