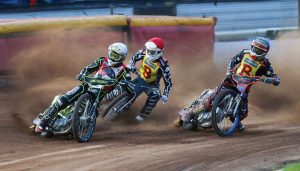 BIRMINGHAM’S return to Perry Barr on Wednesday was curtailed after nine races due to a crash which left Redcar’s Jordan Stewart with multiple injuries.

The Australian was clipped by the Brummies’ Valentin Grobauer on the first bend of Heat 10 and suffered a broken collarbone, dislocated shoulder and broken ribs.

The Bears were 31-23 ahead at the time but the result does not stand, and Friday’s meeting between the sides at the Media Prima Arena now becomes the first leg.

Wednesday’s meeting had been subject to an hour-long delay to the start whilst remedial track work was carried out.

Brummies promoter Laurence Rogers said: “First and foremost the management of Birmingham Speedway would like to thank the supporters for their patience, co-operation and understanding on what was a very frustrating night for all involved.

“We’ve been working a hell of a lot on the track lately, but we have to admit that we’re struggling massively when it comes to equipment and resources too.

“With the break-ins and the fire vandalism, we’ve got two essential pieces of equipment still being repaired, we’ve had another tractor break down on the night and it’s just one thing after another.

“Unfortunately it’s all null and void because Heat 10 didn’t get completed, but we wish both Valentin and Jordan the best of luck and send them our best wishes.”