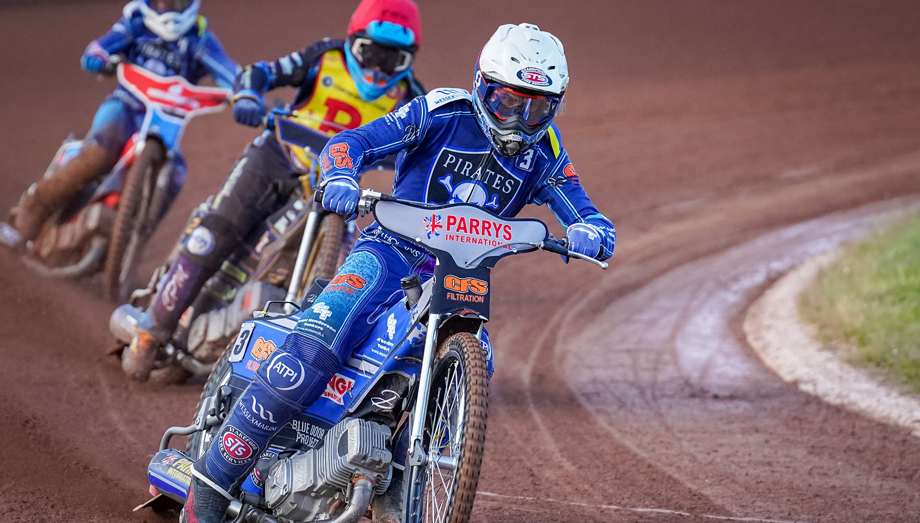 POOLE moved level on points with Championship leaders Leicester thanks to an emphatic 55-35 win at Birmingham on Wednesday.

The Brummies held their opponents for the first half of the meeting and trailed by just two points going into Heat 8, which provided a turning point as the previously unbeaten Stefan Nielsen fell with the Pirates taking a 5-1 in the re-run.

The visitors then extended their advantage for the remainder of the contest, with heat-leaders Danny King, Richard Lawson and Steve Worrall scoring 12, 11+2 and 10+1 respectively.

Guest Tom Brennan picked up 10+1 for the hosts including an impressive Heat 13 win, but No.1 Claus Vissing failed to score after suffering a neck problem when he became entangled in the tapes in Heat 1.

Pirates co-promoter Danny Ford said: “Just like they did in our home match, Birmingham made things tough for us early on as they stuck to us and didn’t allow us to build up a lead.

“I don’t think the final score truly reflected the tightness of the meeting. But I was pleased to see our lads dig deep and kick on as the meeting progressed, as I had hoped.

“It was a solid team effort and it was good to see both Ben (Cook) and Nathan (Ablitt) return a couple of decent performances especially after they had tough ones at Glasgow, as it will serve as confidence boosters for them.”

Brummies boss Laurence Rogers said: “We were in there with a chance at just two points down. But we just fell apart really, and Stefan coming off in Heat 8 affected us and Poole pulled away.

“I genuinely thought that we could’ve pushed them to the end up until then, but they’re strong all the way through and it wasn’t to be.”