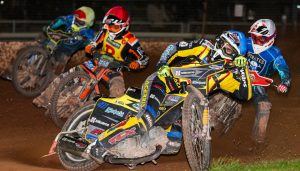 The Pirates were reduced to five riders when Stefan Nielsen crashed out in Heat 1, but a tight contest still ensued with Steve Worrall and former Brummies star Danny King in top form.

But two 5-1s to the hosts in Heats 11 and 14, both involving reserve Paco Castagna (11+1) secured victory, and Chris Harris then inflicted the only defeat on King (14) in Heat 15 with Erik Riss third to leave the Pirates point-less from the meeting.

Birmingham boss Laurence Rogers said: “That was a superb performance – we said we’d be going for it, and we certainly did, and it was nice to deny them a point in the process!

“They were unlucky with losing Stef, hopefully he’ll make a quick recovery from his injuries, and of course it was tough for them being down to five riders.

“But there were three important 5-1s for us during the meeting, including Ash (Morris) and Paco in Heat 14 to seal it, and the boys were on it.”

Poole promoter Danny Ford said: “Once we lost Stefan, we knew we faced a steep uphill battle, but I was proud of the way the lads dug in and kept us in the match all the way through.

“In the end we couldn’t quite get the reward I felt we deserved but right now our thoughts are with, and best wishes go to, Stefan.

“He was in a considerable amount of discomfort, and we fear that he has sustained a punctured lung, broken ribs and a suspected collarbone break too.”