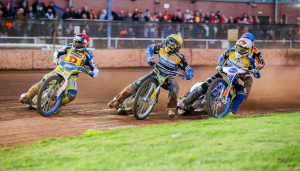 BIRMINGHAM kept up their winning run at home with a 54-36 victory over Plymouth at Perry Barr.

The Brummies went above their opponents in the table as they started the meeting with two 5-1s, with top two Chris Harris (13+1) and Erik Riss (12) scoring heavily, whilst reserve Jack Thomas impressed with 10.

Jason Crump collected 10+1 for the Gladiators but they were unable to improve on an away record which shows just one point on the road so far.

Birmingham boss Laurence Rogers said: “We were very comfortable, the boys were on it, and they were determined especially after losing at Plymouth the night before.

“They really wanted to get a good score, and we made a dream start with those two 5-1s – that’s the way do it.

“The German duo (Riss and Valentin Grobauer) started us off with a 5-1 and then Paco (Castagna) and Jack were tremendous – and to give Jack his due, that’s probably his best meeting in our colours.”