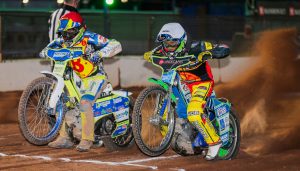 BIRMINGHAM made it back-to-back home wins by edging out local rivals Leicester 46-44 in a last-heat decider at Perry Barr.

Brummies skipper Chris Harris raced on after a heavy Heat 7 crash, and after winning his next two rides he crucially split Lions duo Nick Morris and Ryan Douglas in Heat 15 with the visitors needing a 5-1 to draw.

Harris scored 10 whilst reserve Paco Castagna contributed a vital 12+1, including defeating Douglas and Kyle Howarth in the re-run of the race where Harris had come to grief.

Morris dropped just one point for the Lions as he finished on 13+1, with the visitors taking one league point from the meeting.

Brummies boss Laurence Rogers said: “We knew we could do it, we knew it was going to be hard, but the determination was there from the boys.

“Chris was the rubber-man again, he bounces back all the time, he gets run over and jumps up – he was in pain, but he just got on with it.

“And Paco was certainly on it. I think he was tired by the end of the night with seven rides but he did his job!”

Morris said: “It was a little frustrating having to settle for just the one point, but tonight was about safety as well.

“At least we came away with something. We were obviously looking for a win, but some of the guys weren’t popping out of the start and then it was race over around here tonight. We’ll keep our heads up and go again.”