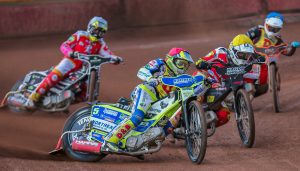 BIRMINGHAM secured a last-heat 46-44 win over Kent in a Championship fixture raced in front of a much-improved attendance at Perry Barr.

The Kings fought back from eight points down and cut the gap to two with a 5-1 from Troy Batchelor and Scott Nicholls in Heat 13.

Batchelor, who scored 16, won the final race but Chris Harris (12) and Ashley Morris secured the vital 3-3 for the Brummies, with Nicholls at the back having been forced into a late change of machinery.

Morris said: “It was a close match and we knew it was going to be a tough one.

“To have a good turnout like we did though and to get the win, which was our priority, brought a buzz about the place again, especially pulling it off in a last heat decider.

“I threw some points away because of a stupid mistake early on and got caught out by the track a bit. But to recover it and help the team to a win was all I could ask for in the end.”