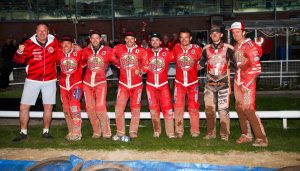 GLASGOW’S sensational start to the season continued with a 48-42 win at Birmingham on Wednesday.

Craig Cook won a last-heat decider for the Tigers to move them onto 13 league points from a possible 14, after the Brummies had threatened to stage a grandstand comeback.

Cook scored 12 points for the visitors, who had been eight points up before Erik Riss (15) and Chris Harris grabbed a 5-1 in Heat 13 to set up a close finish.

“The guys who didn’t do well last night did well tonight – so the team set-up is working like we hoped it would. When they all get going together it’s going to be frightening.

“Going on a southern tour and coming back with seven points is excellent. It’s a pity we came within just one point of getting the fourth tonight but that’s just being greedy.”

Birmingham promoter David Mason said: “There’s no disgrace in losing to this Glasgow team with the confidence they’ve got and despite us having a strong team ourselves, there would have been people out there who wouldn’t have given us a chance of pushing them all the way.

“I have to say a big thanks to Dixie Dean (track curator) and also to Wolverhampton promoter Chris Van Straaten and the three members of his track team too.

“Nobody has a clue about the amount of work they’ve had to pull out of the bag in such a short space of time and while it was far from perfect, I think everyone will agree with me when I say we were much happier and very encouraged.”