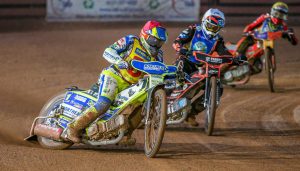 BIRMINGHAM kept their Championship play-off hopes alive with a 52-38 win over Edinburgh at Perry Barr.

Skipper Chris Harris was in outstanding form for the Brummies with 13 points whilst Paco Castagna matched that tally from seven rides at reserve, and Erik Riss (12+1) and Ashley Morris (11+4) both contributed double figure scores.

Sam Masters picked up 12+1 for the Monarchs, and although they didn’t score a league point the Heat 15 win for Richie Worrall (9+1) solidifies their place in the top six.

Brummies boss Laurence Rogers said: “It was brilliant from start to end, and the result we wanted against a very strong Edinburgh side – our boys were on it.

“There was some phenomenal riding from Bomber, he’s just like a teenager and doesn’t know when to give up. Some of those passes around the outside were ‘out of the top drawer’ as Kelvin Tatum might say!”

Edinburgh manager John Campbell said: “38 was the minimum we needed and I didn’t think it would be such a struggle to get to that 38, it was panic stations a little when Sam had his bike problems before Heat 15 as he had been the only one consistently doing well.

“Richie rode brilliantly in that heat though to get the win and he had to – Chris Harris had been brilliant all night. He was really the only one able to pass on that track, but Richie made the start and rode the dirt line that was out wide by that point.”