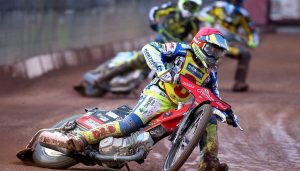 BIRMINGHAM finished with three 5-1s in the last three heats to wrap up a 53-37 win over Berwick at Perry Barr.

The Brummies only led by two points after Heat 11 but dominated the closing stages for their third home league victory in succession.

Erik Riss completed a 14+1 paid maximum and twice combined with Chris Harris (12+1) for late 5-1s. Former Brummie Leon Flint starred on his return to his old home track with 12+2.

Birmingham boss Laurence Rogers said: “It was a bit worrying at one time, it was getting a bit close, but the boys pulled it out of the bag with those 5-1s at the end.

“Erik had his favourite engine back and that very much showed, that was more like the Risky we know, and hopefully it’s the first of many maximums.

“The track was way different, and no dust which was lovely! It’s still a bit bumpy in place, but John (Priest) will be working on that, and we’ll get it right.”

Berwick manager Gary Flint said: “We could have run Birmingham a lot closer in all fairness, as we lost a lot of points we could have held on to, but that’s how speedway goes at times.

“We have Kent up at Shielfield Park on Saturday and fully intend to be back on the winning track at the weekend.”