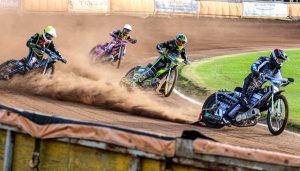 The former Coventry Storm racer won his first four rides on his competitive comeback before combining with Kyle Bickley (14) for a 5-1 in the last heat after the Fen Tigers had gone into that race ahead.

Luke Ruddick and reserve Sam Hagon both scored 13+1 for the Fen Tigers, who had to settle for one league point after a dramatic encounter which saw the lead change hands eight times.

Berwick boss Gary Flint said: “Every time we went behind, we hit back and led again in one of the tightest matches I can remember.

“It was all done through top class teamwork which deserved the success they got after a huge effort, and we’re still top of the league on 15 points, three ahead of Leicester.”